The great white shark is the biggest predatory fish in the world and is commonly found alongside Southern African shores. Unfortunately, these magnificent creatures are in danger of becoming extinct and are already starting to disappear from Cape Town shores. The majority of the remaining great white’s reside 170 km from the city in Gansbaai.

We believe that it’s our duty to help out and aid to reversing this process in order to maintain a healthy lifecycle of the ocean.
Find out why white sharks are disappearing in Cape Town and how we’re trying to reverse this process. 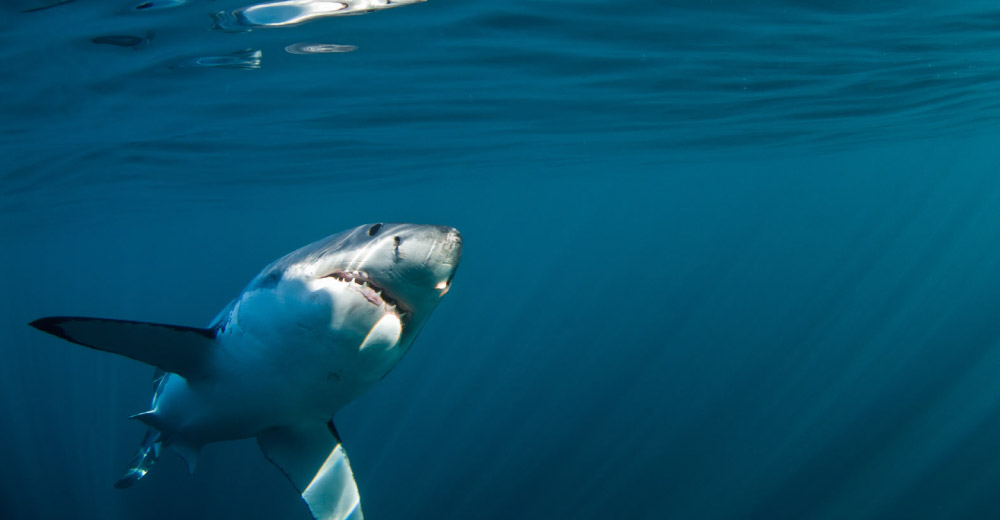 False Bay, Cape Town was once known for its population of great white sharks. However, there has not been a single sighting of these mammals in this area for over a year now.

Prior to 2016, shark spotters recorded an average of 205 white sharks per year during spring and summer. However, by 2018 the number of shark sightings dropped by 50 per year and in 2019 there hasn’t been a single spotting. Now, there is public concern surrounding an extinction of great whites in the area.

Who’s to blame for shark disappearance?

Is it the orca whale, pollution or overfishing?
The great white shark predator, the orca whale is often blamed for the disappearance of the mammal however, this has been refuted by scientists. According to marine biologist, Dr Sara Andreotti, it is very unlikely that the two orca whales in the area can be blamed for the disappearance of an entire shark species from such an important site.

According to Dr Andreotti, the sharks are sensitive to changes in climate so pollution and overfishing of natural resources could also be a huge contributor to the disappearance. It’s worth noting that the smaller sharks (that great whites feed on) are often overfished in the False Bay area.

Although white sharks are protected in South Africa, their food source is not. Seals make up a large portion of the white shark’s diet, but they also need to feed on smaller sharks as well.

Where did the white sharks go? 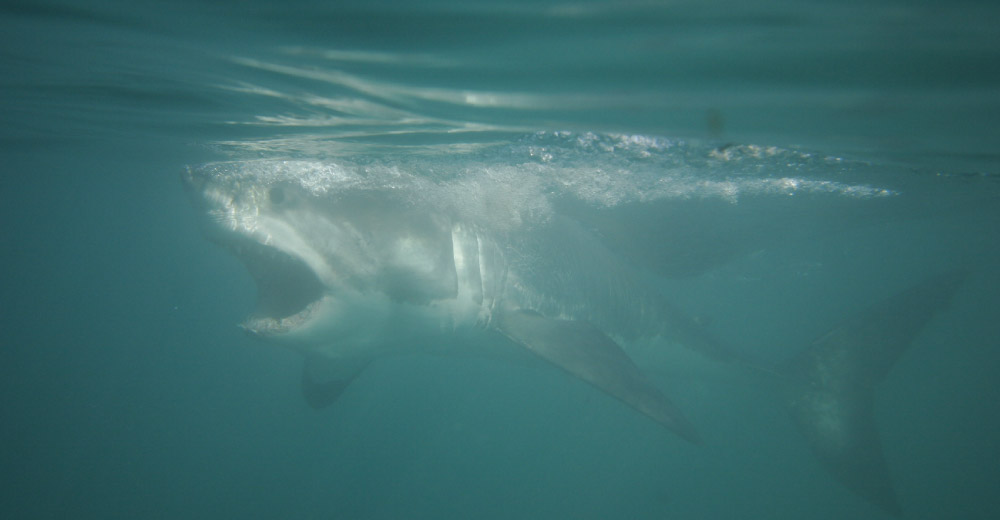 Fortunately, there are still sharks present further down the southern African coast. Especially in Gansbaai, where shark sightings are quite regular. Gansbaai is located 170 km from Cape Town and is known as one of the densest populations of great white shark destinations in the world. And according to the White Shark Diving Company (WSDC), there have been regular shark sightings since May including 36 sharks over 20 sea days in September.

Due to geography, water temperatures, depth and easy access to food, Gansbaai has earned worldwide recognition for the single most successful area to view the great white shark within a very short period of time. Because Gansbaai is known as the mecca of great whites, cage diving adventures are regular all year-round.

At White Shark Ventures, our motto is “Research, Education, Preservation”. Our company serves on various national and international wildlife conservation boards and trusts, thereby ensuring that our crew remain focussed on research and conservation at all times.

Although shark cage diving and viewing is an entertaining experience of a lifetime, every excursion is based on creating awareness for these highly misunderstood and endangered species.

Due to misinformation, these beautiful sharks nearly faced extinction due to brutal and unnecessary killings over the years. We work towards putting the “jaws perception” back into perspective and encourage our visitors to contribute towards preserving our heritage.

Each one of us can make a difference – we aim at educating young and old, that sharks are highly misunderstood and form a vital part of our marine eco-system. It is therefore vital that these great whites should be protected – not harmed contrary to what Hollywood films depict. 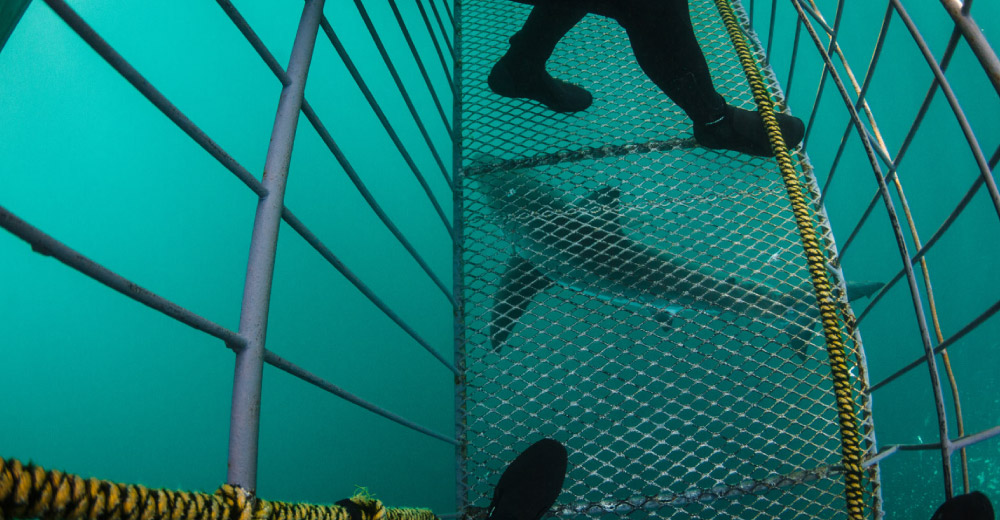 Besides creating awareness for these great white sharks, we also strive to assist the wildlife as much as our capacity allows for. Our tours are 100% eco-friendly and we refrain from using anything other than natural products, to attract the sharks. Utter care is taken when handling the sharks, ensuring that they are not harmed or unduly disturbed in any way.

We also contribute to the preservation of other marine life such as the Seabird Rehabilitation Centre called SANCCOB. Our Managing Director, Mariette Hopley, is acknowledged as an international wildlife facilitator and rehabilitator. Marriete is also regarded as an expert in oiled wildlife and has dedicated most of her life to the rehabilitation of wildlife. Today this project is marked as one of its kind in the world and is deemed a huge success.

Although every shark cage diving and shark viewing adventures are a fun and thrilling experience, the intention behind every journey out to Dyer Island is intended to bring awareness to this pressing issue. Our animals and environment are getting affected by human negligence. It is therefore important that we use our resource to reverse this process before it is too late.

Our tours are not only highly educational but we also actively participate in documenting valuable research information on great white sharks. Our company was the founders of the Great White Shark Protection Foundation, a body dedicated to the protection and preservation of the great white shark globally.

If you want to explore the beautiful and vast ocean waters whilst doing your bit for our marine life, then why not start with shark cage diving? At White Shark Ventures, we offer year-round tours in Gansbaai so that you can take a closer look at these majestic creatures.

And if you’re not ready to swim with the sharks then join our shark viewing excursions. Take the pound seat and watch how these great white sharks are hunt from a close but safe distance.

For breath-taking adventure, see our shark diving and viewing rates and packages now! 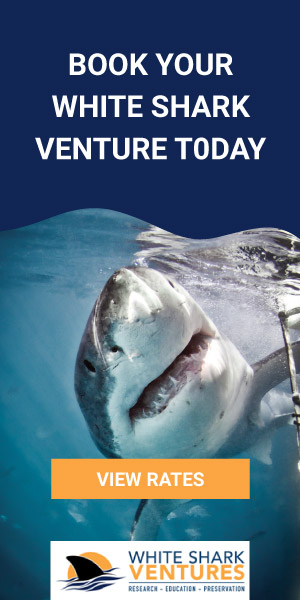